From time to time, you’ve probably heard that the U.S. government has issued a travel advisory or warning about a specific country, like Mexico or France. Here’s what they mean—and how to find out more information about them.

The U.S. Department of State actively monitors what’s going on in countries around the world, so they can better protect U.S. citizens who are there (or planning to go there), whether it’s for work or pleasure. When something changes, they issue a travel advisory notice through the travel.state.gov website. The advisories stay issued until something changes, so there’s a notice for pretty much every country and area you’d ever want to visit. Even Antarctica has one.

There are four levels of travel advisory:

They’re issued for several reasons, including:

No country doesn’t have at least a Level 1 travel advisory. There’s always some small measure of risk with international travel, but in a country like Ireland, Sweden, or Thailand, as long as you keep your wits about you, it’s unlikely you’ll be any less safe than you would be at home.

Level 2 travel advisories are issued for countries where there’s an increased risk of something happening. Both the United Kingdom and France have experienced terrorist attacks over the last few years, so they have a Level 2 advisory. There’s a small risk of crime and kidnapping in Mexico, so it also has one. Personally, I’d issue the U.S. a Level 2 advisory, so as long as you’re vigilant and don’t do things like wander the streets drunk at night or take part in political demonstrations, you’re unlikely to encounter any problems.

The U.S government issues Level 3 advisory to countries where they think people should reconsider traveling to, or only go if it’s essential. It takes a weird set of circumstances for them to consider the country more dangerous than Level 2, but not dangerous enough to issue a Level 4. Countries like Nicaragua, Nigeria, and Turkey all have Level 3 advisories issued for various reasons.

The strongest travel advisory the U.S issues is Level 4, do not travel. These are reserved for countries that are currently experiencing major strife, like the extreme political unrest in Venezuela or the ongoing civil war in South Sudan. When it comes to Level 4 advisories, I suggest you heed them.

How to Check a Travel Advisory 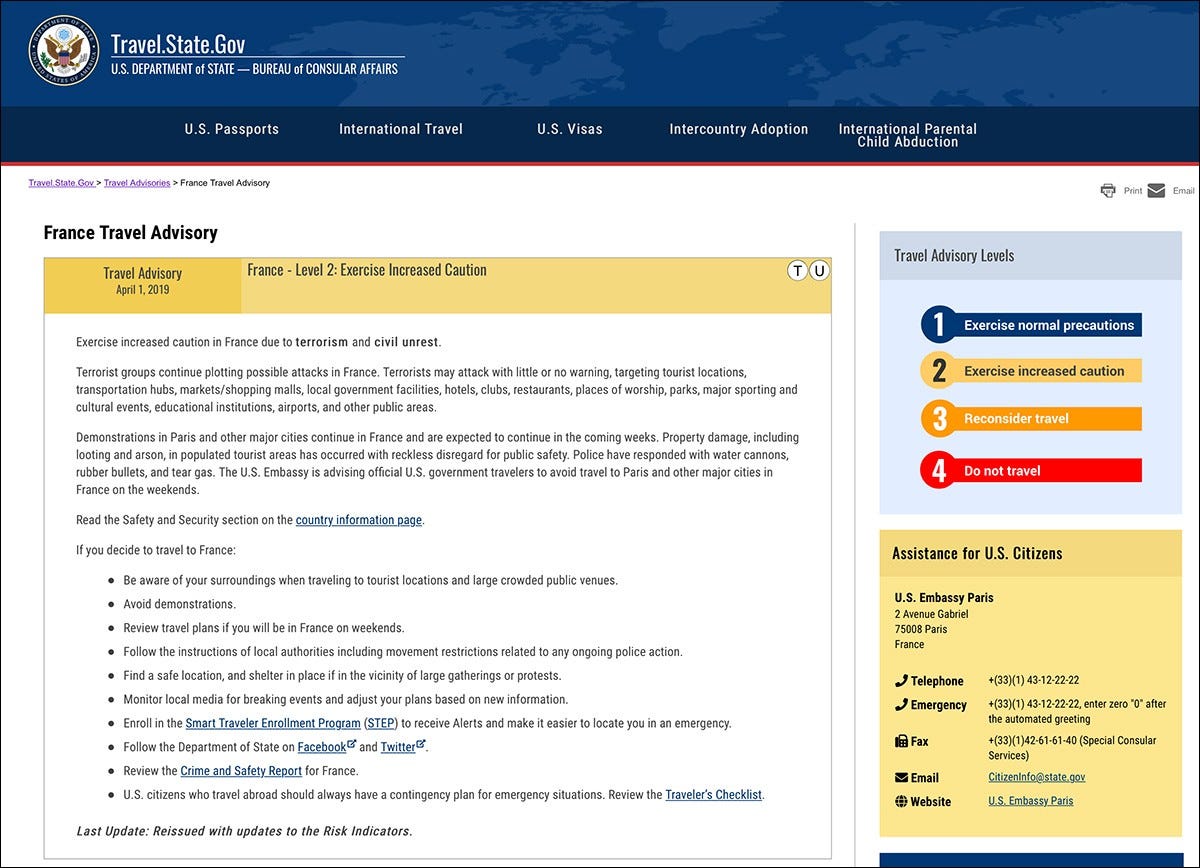 Before you head off or plan a trip to somewhere, I’d suggest hitting up the Department of State’s website and checking the current advisory level of the country where you want to travel.

The advisory notice will give you a good bit of information, including:

Even if you aren’t a U.S. citizen, the advisories are worth checking out. They tend to be reasonably measured and not overly reactionary. For example, there are a total of less than 30 Level 3 and Level 4 travel warnings. Even the U.S. government agrees the vast majority of the world is safe—if you don’t act like an idiot.

How to Jailbreak iOS 13.3 Using Ra1nUSB on a Windows PC

How to File Your Taxes Online For Free